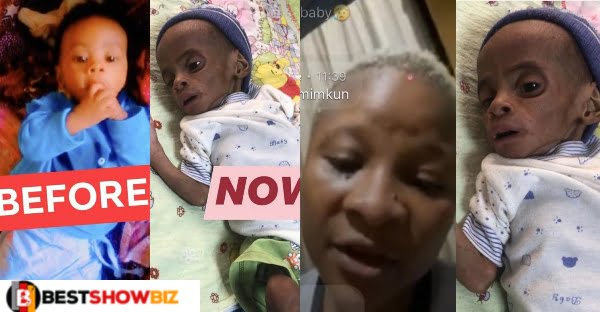 Sad News: Boss starves the baby of her employee to death; see before and after photos of the baby

The kid who was reportedly starved to death by his mother’s boss in Lagos has died as a result of the abuse.

On Friday, December 17, the deceased’s mother screamed when she saw the condition of her 5-month-old infant, who had reportedly been taken away by her madam.

To bring attention to what her madam had done, the lady appeared on live television with human rights campaigner Harrison Gwamishu to report the incident.

Mother, 19, claims that her madam took her kid away because she was unable to pay back the hospital cost that she had helped her pay off.

Photos of the infant taken before revealed him to be in good health. But after purportedly spending time with Tina, the infant reportedly dropped a significant amount of weight.

A collaboration between Lagos State Social Welfare and the police were required to bring the mom and her kid back together.

Harrison issued an update on his Instagram page, in which he stated that the baby had passed away.