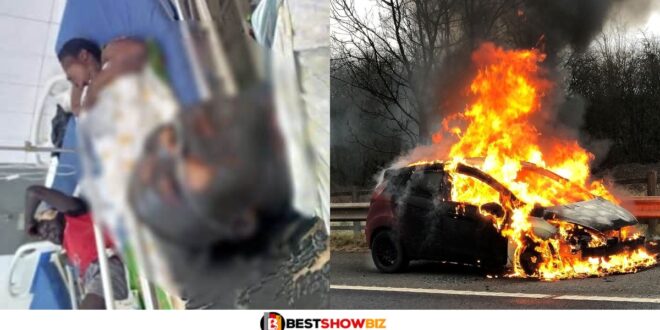 A Sekondi-based Bolt driver who was reportedly set on fire by a rider on Wednesday at Sekondi-Baka-Ano has died.

Edmund Kweku Appiah, Chairman of the Ghana Online Drivers Association’s Western Regional Finance Committee, confirmed the victim’s death to Citi News, stating the victim could not survive after being moved to  37 military hospitals.

According to Mr Appiah, the news has generated anguish and worry among many drivers who were looking forward to transporting holiday visitors to their different destinations.

He stated that many online drivers are terrified for their life since they lack military training, unlike the deceased.

“Our navy officer brother died yesterday [Friday], and I was horrified the entire day.” Everyone is stunned, and we are praying to God to keep us safe.

We’re in the midst of the Christmas season, and we’re not sure if bolt drivers can get people home. It’s excruciating. Two men have been apprehended based on the information we have. “We hope it’s real,” he remarked.

After the rider reportedly poured fuel on him and set him on fire at Bakano, Sekondi, the deceased driver was injured on his face and various other parts of his body.

The rider is suspected of being a carjacker who attempted to take the car from the driver.