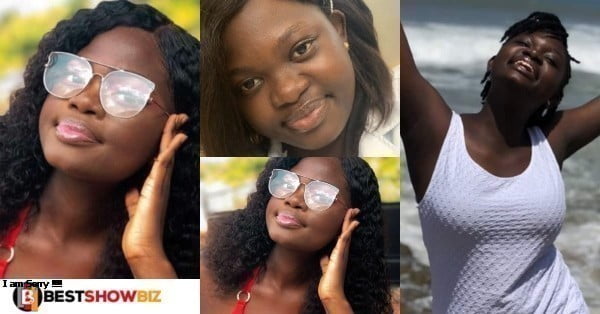 Rita Adjoa Tawiah Abodoh, a medical student at Kwame Nkrumah University of Science and Technology who died following her surgery, has been laid to rest.

Rita died after difficulties arose from surgery and leg amputation, according to her family.

“Rita was admitted to the Cape Coast Teaching Hospital (Interbecton) on two occasions when she was back in Cape Coast.

“She could not respond to treatment during her last admittance and had to give up the ghost on Friday, November 19, 2021, at about 4.30 a.m., at the prime age of 22 years,” the family explained.

Her family and Ghanaians who gave to her through crowdfunding and donations were devastated by the news. They flocked to social media to express their regrets and sympathy, pleading with God to grant her soul peace.

Her family describes how the story unfolded:

“Rita underwent a fourteen (14) hour-long surgery at the University of Ghana Medical Center (UGMC) at the end of March 2021, and the surgery was deemed successful, thanks to a highly successful fundraising effort to raise the necessary funds for the surgery.”

Read Also  "You are disgracing your boyfriend in public, I will tell him." Nana Aba Anamoah threatens Serwaa Amihere.

They were the finest Rita could obtain from within the country at the time. The success story was shown on Ghana Television’s news bulletin for the day.

Everyone who heard about her success story was ecstatic and grateful to God, especially her university officials and coworkers, crucial fundraisers, and, most significantly, her family and friends.

However, the family’s happiness was short-lived as complications developed, necessitating a variety of medical procedures.

As a result, Rita was transported to the operating room on more than sixteen (16) occasions for wound debridement, amputation, urine and stool diversion, and skin grafting, among other procedures.

Rita had to go through a lot of pain. Despite all of this, she was deteriorating by the day, and her chances of becoming a physician were fading.

She remained bedridden for more than seven months after her initial surgery, battling cancer and suffering. After being discharged from UGMC, she was transferred to Korlebu, Boss Medical Center, and The Trust Hospital on several occasions to meet expert doctors for evaluations, but all to no avail.”

Ghanaians banded together early this year to save a medical student at the Kwame Nkrumah University of Science and Technology (KNUST).

Her right pelvic bone was found to have a cancerous tumor.

The doctors proposed a surgery in which the damaged pelvic bone would be removed and replaced with a prosthetic.

Because the 150,000 euro procedure was out of reach for her family, they turned to crowdsource and solicited donations.

Ghanaians arrived with their capes on, ready to conduct heroic acts, which they did.

Rita received her funds, and it is now stated that she had a successful surgery.

“We’re pleased to notify the entire student population that Rita Abodoh has completed her operation and is currently undergoing treatment.” In a tweet, the KNUST Student Representative Council said, “Thank you, everybody, for your prayers and great contributions.”

Rita was laid to rest at the Holy Child school park in Cape Coast on December 4, 2021.