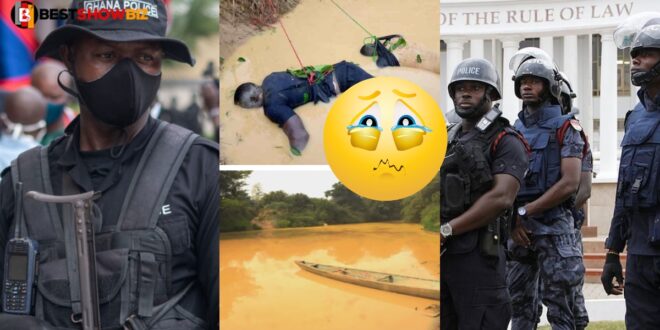 The bodies of two police officers who drowned in the Oda River at Kobro near Jacobu in the Ashanti region’s Amansie Central District on Wednesday evening have been recovered.

The bodies of the deceased were fastened to the canoe and hauled across the waters by a search party drawn from the villages along the river’s banks this morning.

Their decomposing bodies have been placed at Obuasi’s Seventh Day Morgue as authorities investigate the incident.

Contrary to an earlier report, the two police officers who drowned in the Oda River at Kobro near Jacobu in the Amansie Central District of the Ashanti region had gone to extort illegal miners who had anchored Chinese fang dredging machines in the river to mine for gold.

Lance Corporal Stephen Kyeremeh and Amedius Akwesi Boateng were among a gang of four Obuasi District Police Command officers who allegedly stormed the Apamprama Forest Reserve in search of armed robbers after receiving a distress call that some small-scale miners had been attacked in Kobro.