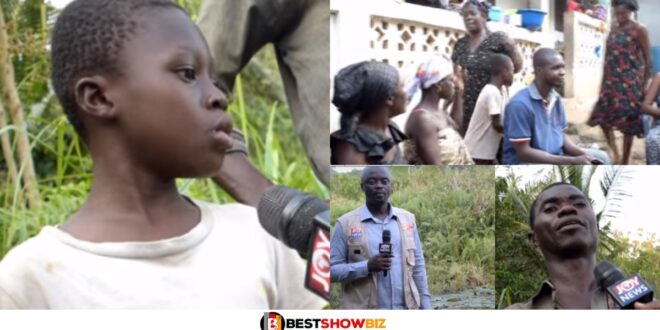 Sad News: 13-year-old boy drowns in ‘Galamsey’ pit in an attempt to rescue his younger brother.

A 13-year-old boy perished in an abandoned ‘Galamsey’ pit while attempting to rescue his younger brother at Patriensa near Konongo in the Ashanti Region,.

Emmanuel Aboagye, 13, lost his life while trying to save his brother, Yaw, 9, who was rescued by their father later on.

In an interview with JoyNews, the father and the survivor described what happened on the scene. “My brother, Aboagye, and I came here to fetch water. I tripped and fell into the water, he jumped in to save me but I learned he drowned,” said the nine-year-old boy, Yaw who was saved.

The father, on giving his accounts, said: “He was not moving when I brought him out of the water. After rescuing him, I was told his senior brother, Aboagye was also in the water but I couldn’t save him because I am not a good swimmer.

“He was so weak when he was finally retrieved but I did not have any hope he was alive though those around were saying he was still alive,” The father added.

Read Also  "I need a sugar daddy. Now I have done my body and look attractive "- Kisa Gbekle (video)

Several local divers spent hours searching for the kid who eventually died on the route to the hospital. Shadrach Ofori, a member of the rescue team, expressed disappointment about how the police at Patriensa reacted to the incident as he revealed that no officer showed up at the scene despite the case being reported.

The police whiles reacting to Shadrach’s claims said the people reported missing children but they told them to conduct a search for them and report to police later.

Meanwhile, according to locals, Emmanuel’s death takes the total number of youngsters who have drowned in the area’s over 100 abandoned trenches to four and residence are worried.

A group of locals in the region called upon the leaders of their community and the government for help in covering up the ‘Galamsey’ pits.

“If the government would help us, we would be happy because the pits are killing children. These pits are everywhere, all around,” one resident told JoyNews.