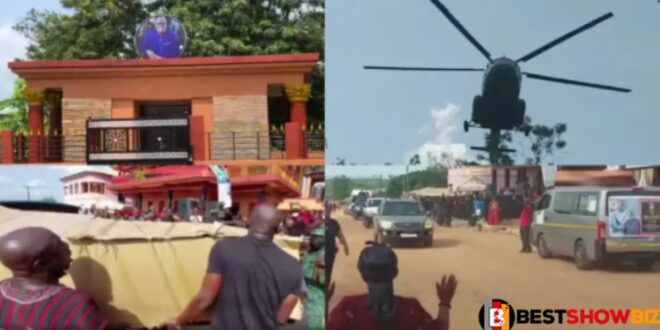 Sir John’s burial and final funeral ceremonies are anticipated to take place in Sakra Wonoo in the Ashanti area, where he was born.

Sir John’s lifeless remains have been transferred to his hometown ahead of the funeral. His body was flown to Sakra Wonoo on a chopper.

The helicopter carrying Sir John’s remains is seen hovering over the town in a video obtained by bestshowbiz.com.

A lengthy caravan of vehicles, including a hearse, arrived shortly after the aircraft landed to collect Sir John’s casket. There were a large number of mourners waiting in front of Sir John’s family mansion as the procession arrived.

Many of the mourners were in tears, as bestshowbiz earlier reported. The casket was carried into the house by a group of men, including military troops.