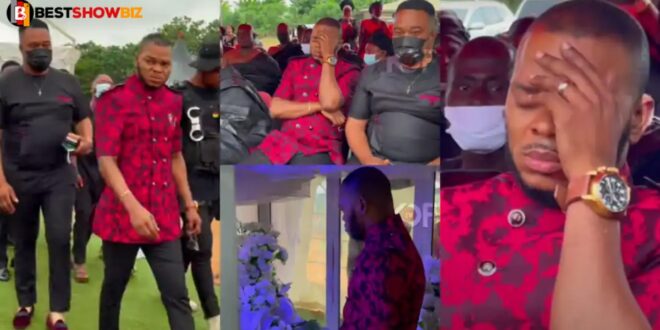 As he put his late father, James Kwadwo Bonsu, to rest, Bishop Daniel Obinim, the founder and head of International God’s Way Church, was absolutely heartbroken.

Obinim’s father, who died a few months ago, was put to rest on Saturday, August 28, 2021, in Abuakwa Sepaase in Kumasi.

Obinim was seen coming to the funeral grounds in a convoy in a video posted by Kofi TV. He then made his way around the gathering, greeting other mourners.

Following the pleasantries, he proceeded to pay his respects to his late father’s remains.

Obinim stood at the casket, stunned and in a daze as he gazed at Opanin Bonsu’s bones.

Obinim in the video sat down after filing past the casket for a little while. His eyes were closed, and his left hand was covering his face, looking heartbroken.