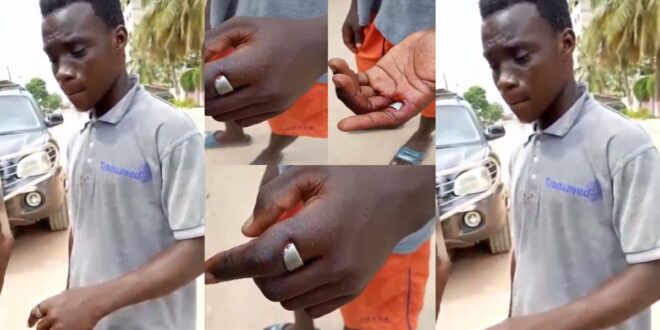 Sad! A boy at Kasoa’s finger is being ‘eaten’ up by a friend’s ‘Sakawa’ ring.

Since putting on a ring that belonged to one of his friends, a gentlemen in his late teens has gotten himself into some trouble.

According to a video article sighted by bestshowbiz.com, the gentlemen was at a gaming center near Iron City in Kasoa when one of his playmates took the ring, put it on the table, and forgot about it.

The young man was in excruciating pain until the following day, when some villagers learned of his plight and threatened to cut the ring off forcibly.

When a fragment of the ring was cut off, it mysteriously passed into the boy’s finger, digging deep into his bone, according to an eyewitness who recounted the incident from that moment.

At this time, the boy was crying at the top of his lungs.

When the ring’s owner was actually identified and asked, he confirmed that the ring could not be exposed to water while on the finger.

He also said that before the ring can be removed, the finger must be amputated or baby blood must be used in a ceremony.