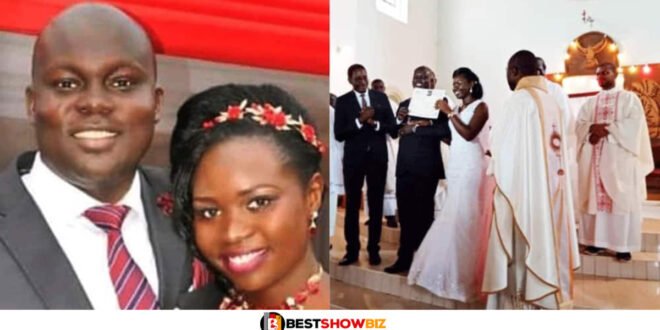 Roman father quits seminary school after 20 years of training to get married after falling in love.

Jude Thaddeus Jasu, a Ugandan man who studied at a seminary for twenty years before marrying, has offered his ideas on marriage.
In August 2019, Jasu married Connie Mary Kiteko at St Francis Chapel at Makerere University in Uganda.

Jasu had always desired to be a priest and had prepared for over twenty years to attain his goal. But, for reasons he refused to divulge, he chose to abandon his quest.

Jasu stated that it was difficult for him to cope outside of the seminary and that he needed a lot of counseling. He claimed that it took him three years to learn how to deal.

Read Also  Sister of IG model who died in Ghana want the autopsy done in America; says Ghana is corrupt

He explained, “I had to go thru a lot of counseling from both of my parents,”

“I had to go through a lot of counseling from both my family and Mill Hill Missionaries,” he explained. “God’s ways are not our ways, and He is the one who has a reason for everything,” I was informed.

When it came time to marry, he was unsure how to proceed because he had no prior dating experience.

He met his wife in 2015 when he went to Uganda for the holidays and was asked by a friend to stay.

“He informed me about his sister and granted me permission to date her,” he explained. Despite the fact that I had no idea what to say or do, he refused to approach her on my behalf. When I finally got to meet her

“She was so lovely that I couldn’t say anything.”

He mustered the confidence to ask his wife out, and everything went swimmingly.

Jude added that he is now loving his marriage and that he does not regret his decision.