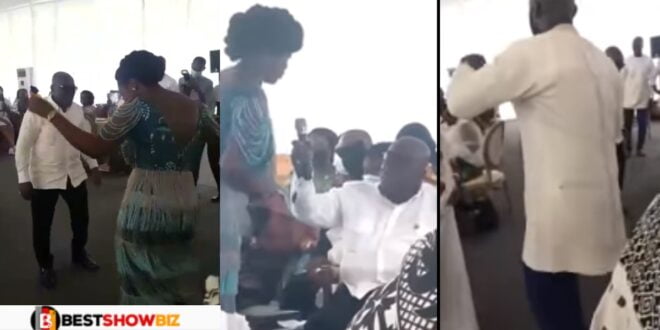 Rich Marriage: Daughter Of President Akuffo Addo gets married to the Son Of GIHOC Distilleries-Photos (video)

GIHOC Distilleries’ CEO’s son has reportedly tied the knot with the daughter of Ghana’s president, Nana Akuffo Addo, over the weekend, according to reports in the country.

Kwabena Jumah, who happens to be the son of Gihoc distillery owner Maxwell Kofi Jumah, was seen with his long-term lover Edwina Nana Dokua Akufo-Addo, who also happens to be the president’s daughter, in photos that have quickly gone viral.

Several prominent members of society were in attendance for the exclusive celebration, which took place at the Presidential Villa on Saturday, October 9, 2021, to celebrate the marriage of the two peoples.

When it came to dressing for the occasion, President Akufo Addo chose a white long sleeve shirt and black trousers, while the Chief Executive Officer of the GIHOC Distilleries, Maxwell Kofi Jumah, was dressed in a very beautiful kente cloth.

Former President John Agyekum Kuffour and his wife Samira Kuffour, Vice President Dr. Mahamudu Bawumia, and other prominent members of the NPP were also in attendance at the wedding ceremony, among others.