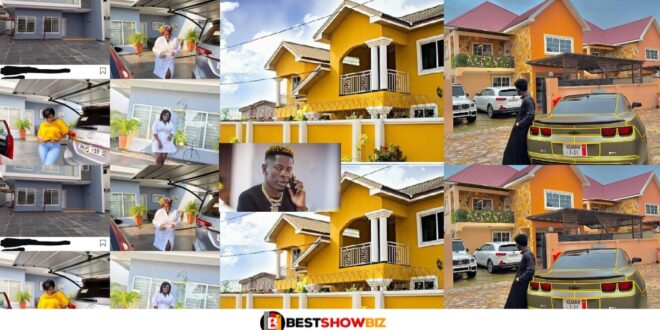 Most of our celebrities are tagged as rich judging from their appearance and what they flaunt on social media. Others are also judged from the properties they have acquired, such as mansions, cars, businesses, and others.

Bestshowbiz.com has compiled the plush mansions of celebrities who consider themselves rich in the industry.

Tracy Boakye is a well-known Ghanaian actress. She also works as a movie producer. Tracy Boakye has appeared in several films and has also produced a number of them. She’s been dubbed “East Legon landlady.” The residence of Tracy Boakye is seen below.

Kuami Eugene is a well-known Ghanaian musician and composer who has released several albums. Kuami Eugene has risen to become one of the most prominent artists in the country in recent years. In Ghana, he is well-known for the number of successful songs that he has written.

Read Also  "i am not a second choice"- Sandra Ababio reacts to lil wins revelation that he is married.

The Angela hitmaker has amassed a substantial fortune through his singing career. A photograph of Kuami Eugene and his home is included below.

Shatta Wale is an Award Ghanaian dancehall artist who has won several awards. In Ghana, he has created a large number of successful songs.

Shatta Wale has collaborated with a large number of musicians in Ghana. Shatta Wale is well-known for being extremely wealthy and for bragging about it. The residences of Shatta Wale are seen in the image below.