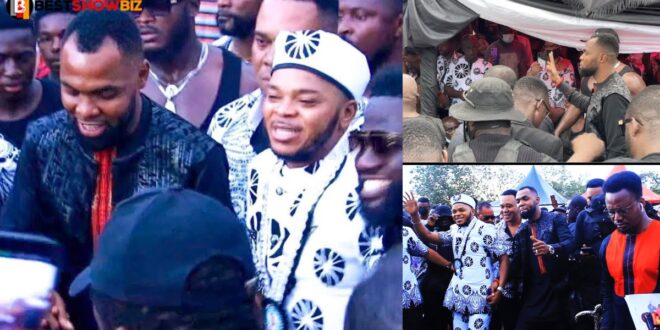 Reverend Obofour and Bishop Daniel Obinim went even further to establish that they had reconnected and rebuilt their friendship after appearing to put their differences aside on live television.

On Saturday, August 28, 2021, at the final funeral rituals of Bishop Obinim’s late father, James Kwadwo Bonsu, Rev. Obofour made a magnificent arrival at the funeral grounds, backed by security officers, with scores of people in his entourage.

Before taking his seat, Obofour went about and exchanged pleasantries with some of his colleagues and other mourners.

Rev Obofour was later hailed with dancing from afar by his former opponent Obinim, who had changed his traditional red funeral garb to white and black.

He smoothly mirrored the dance from his seated position, leading a procession of rhythmic steps to the Highlife music blasting from the speakers.

The two pastors met in the middle of the funeral grounds, to the delight of the attendees.

While bills of money were sprayed on them, Rev Obofour and Bishop Obinim’s gesture towards each other changed the mourners’ mournful atmosphere into elation.