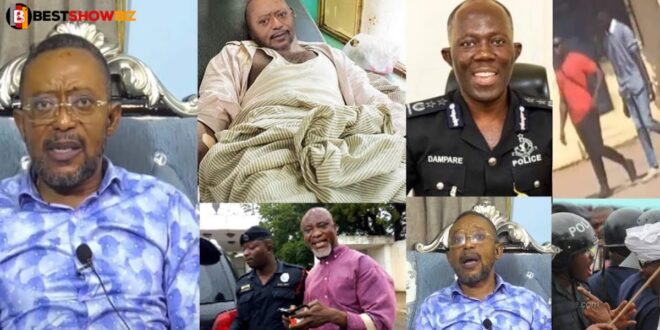 Reverend Owusu Bempah has spoken out for the first time since being arrested for threatening the owner of Thunder Tv, Nana Agradaa, in a viral video.

Owusu Bempah, who was speaking about his time spent in police custody, called on the public to beg the Inspector General of Police (IGP), George Akuffo-Dampare, to pardon him if he had ever mistreated him in any manner during his time behind bars.

His appeal comes after he was subjected to severe treatment when he was taken to the hospital after becoming ill while detained in police custody.

Police officers threatened to shoot Hopeson Adorye, a member of the New Patriotic Party (NPP), when he demanded that the Man of God be released from his restraints after he had been handcuffed to his bed like a criminal, according to the available information.

Additionally, he was said to have been returned to the police cells after being released from the hospital on the orders of the IGP.