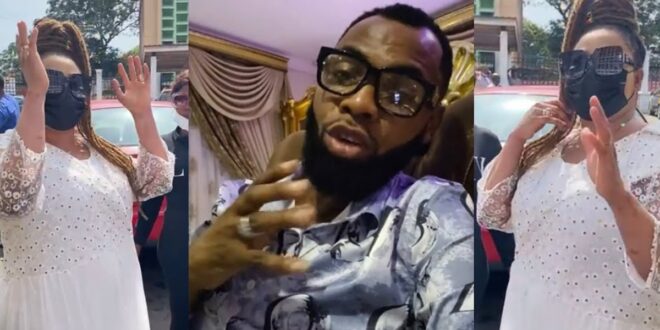 Obofour has little to tell in the video but to delicately tease Agradaa, the one who was nearly on the losing end.

He claims to be the “king of the night,” and he has protected his word, as he promised. “I informed you I will protect my title one day; I am the King of the Night,” Oofour declared.

He took advantage of the chance to introduce his current identity, which he wishes the public to refer to him by in the future, in addition to the well-known moniker “The Iron boy.”

Obofour revealed his latest moniker: “Innocent.” During his Facebook live session later this evening, he kept repeating the term. The minister went on to say that he just came on to pronounce his new identity.

“My name is innocent, call me 3 years Innocent. That’s the new name I want to be called with, Queen Ciara your husband I’m Innocent”. Obofour affirmed.

As strange as it might be, you do not require a soothsayer to figure out why he changed his name to Innocent only hours after Agradaa was arrested.

Nana Agradaa alias ‘Abuuzigi,’ the self-styled Fetish Priestess, has had it with Rev. ‘Innocent’ Obofuor in recent times since their long-running feud resurfaced.

Obofour, the famous televangelist who has vowed to deal with Agradaa in the midst of their spat, re-arrested her today (late afternoon) for criticizing him on social media.

Nana Agradaa was arrested shortly after being given self-recognizance bail after paying her license for this year (2021) and a one-year advance following her original detention by state protection for illegally transmitting her two television stations.