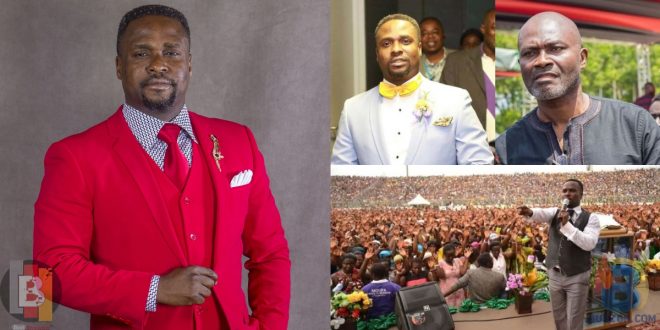 Rev. Osei Bonsu also called Rev. OB has been in the news for the past week after MP Kennedy Agyapong took a swipe at him.

according to this victim whose name was not disclosed Rev. OB who is the founder and leader of MOGPA is a “Sakawa” who imports his items from Benin.

the victim who is a Ghanaian based in the United States of America revealed this in an interview on Oman GH.

he revealed that Rev. OB is swindling his members with his fake miracle items and he indeed swindled him by making him believe an amount of money has been deposited into his bank account.

the victim disclosed that though he got a bank alert on his phone, the bank later called him that it was the wrong traction after his encounter with the said man of God.

speaking in the interview, the victim said;

“My father was sick so someone recommended Rev. OB to me. I visited him on four different occasions seeking help. In one of my encounters with him, he prayed for me and after the prayers, he brought out 100 dollars bills from his pocket. I got shocked but decided to keep mute, just after that, I received a bank alert indicating an amount of 700,000 US dollars has been deposited in my accounts, the bank later called to tell me it was a wrong transaction. He also gave me anointing oil and after applying the anointing oil, my entire body began having some funny feelings so I consulted another pastor and he told me I’ve been possessed”

‘He is a real Sakawa in a suit, he has been importing Miracle items from India and Benin for his church activities. I will get him exposed. I will make contacts to Hon. Kennedy Agyapong and reveal all his secrets on TV.”

listen to the audio below;