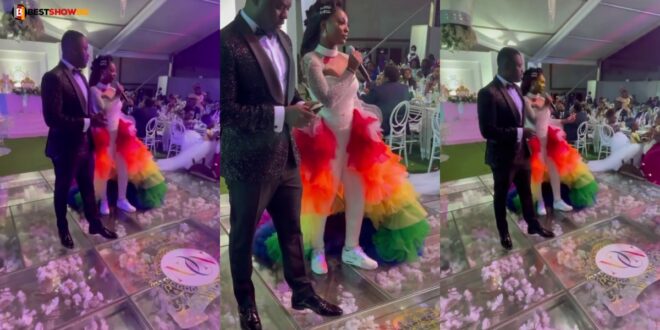 Naa Dromo Korankye-Ankrah, Rev Sam Korankye Ankrah’s second daughter, is currently the topic of GH thanks to her alleged LGBT gown for her after-party meal.

Naa Dromo and her husband Nana married over the weekend.

Her wedding was an eye-opener, as her father finally married her off so she could start building a home with her new spouse.

The gown Naa Dromo wore to her after-party, on the other hand, has gotten a lot of people talking on social media.

Many people were surprised that Naa Dromo Korankye-Ankrah opted to wear a gown that was dominated by the colors of the LGBT community, given the country’s position on the issue.

It is unclear what her intentions were on the eve, but some are giving her the benefit of the doubt, assuming she chose the gown for its beauty rather than to show her support for the LGBTQ community.