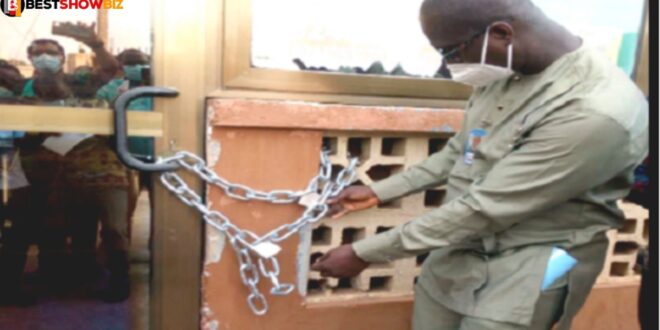 Rent Control office in Accra Locked by the landlord over non-payment of rent arrears.

The Rent Control Department, which is responsible for regulating rent and landlord-tenant disputes, is facing eviction since its office in Amasaman has been closed due to non-payment of rent.

According to a GhSplash.com story, the furious landlord, Mr. Joseph Naija Abugri, stormed the premises to place the office under lock and key after losing patience.

Mr. Abugiri expressed his dissatisfaction by adding that he had attempted numerous times to get the office to pay the 5-month rent arrears but had been unsuccessful.

He claims to have sent many letters to the Head Office, but has yet to receive a good response. As a result, he used force to lock the office, sending a strong message to those in authority about his seriousness.

The absurdity of the situation is that a department tasked with addressing rent issues has been evicted or had their office space locked due to non-payment of rent.

The landlord, Mr. Abugri, had the following to say:

“When there is a disagreement between a landlord and a tenant, the Rent Control Department resolves it. As the landlord, I was required by law to file an official report at the Ministry’s headquarters.

“They requested that I forward it to the Amasaman office because that is where my property is located. In other words, they asked me to report to the same people who owe me money.”

“I was left with only one choice: buy padlocks and secure the facility. I demand full payment for the five-month arrears.”

“I no longer want them in my facility. They need to look elsewhere. There are numerous houses available for rent in Amasaman.”