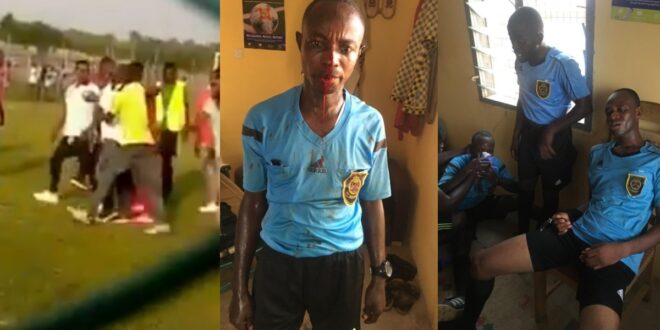 Referee beaten by fans and loses all his teeth in a division one match over bad officiating.

Fans thrashed match officials officiating a Ghanaian Division One league match, causing the referee to lose all of his teeth.

The match between Mighty Royals and Tano Bofoakwa, which took place on March 28, 2021 at Wamanafo Park in Dormaa in Ghana’s Bono Area, took a dramatic yet unpalatable turn when angry fans descended on match officials over poor officiating.

Refree Naitre Suntuo Aziz received the lion’s share of the boos from the crowd during the game, which ended in a goalless tie.

It took the help of overbearing police and security officers to save these incompetent Macth officials from the clutches of these ravenous supporters. After various degrees of physical violence and injuries, they were escorted into their cubicle.

Although the Ghana Football Association (GFA) had previously requested fans not to be present at stadiums and match centres due to the enforcement of COVID-related restrictions, the fans somehow made their way to the park, and this barbaric event shows how low Ghanaian football has dropped and how unpredictable our national security has become.

The following are the match officials for the game who were assaulted:

Sumleman Mohammed and Yakubu Abdul are the assist referees.

Pius Kwarteng is the match commissioner.

Afriyie Akuffo King is the Treasurer of the GFA.

Macthes of these two sides have already seen cases of hooliganism and outright misuse of authority, according to history.

The home side and its backers typically take advantage to either outsmart match officials or exploit games in their favor.

Here’s where you can see the video: