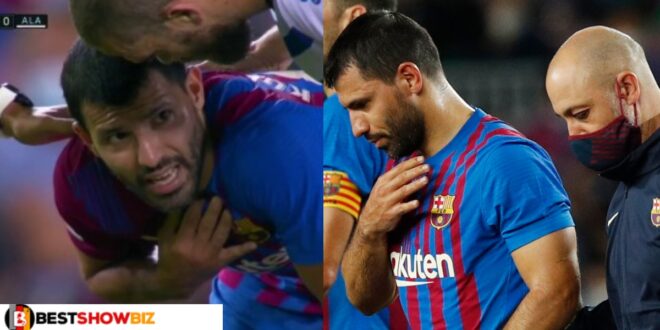 Recent heart complications have forced Aguero to retire from football career at the age of 33.

Sergio Aguero, the FC Barcelona striker, and Manchester City former star is expected to announce his retirement from football next week, according to rumors circulating from Spain.

Following recent issues that came to light during one of his first La Liga matches with the Camp Nou club, the 33-year-old Argentine maestro is ready to retire from the game after 18 years at the highest level of professional competition.

An arrhythmia in Aguero’s heart occurred during a 1–1 draw at home against Alavés at the start of November, a problem that had initially kept the Argentine out of play for three months.

As a result of the aforementioned challenges, according to a new claim from writer Gerard Romero, Sergio Aguero will now officially retire from football.

Several sources have confirmed to Romero that a press conference has been set to officially announce Sergio Aguero’s retirement from football, in what will definitely be an emotional moment.

Only five games were played for the Blaugrana during his time there, and he managed to score once, in the Clasico against Real Madrid, which took place at the Camp Nou.

Prior to exiting the field against Alaves due to chest discomfort, he had played a total of 165 minutes for Barcelona in LaLiga Santander and the Champions League.

Medical examinations revealed that Aguero had suffered from arrhythmia, and despite efforts by those around him to downplay the possibility of his retirement, the Argentine has opted to call time on his football career and retire from international sport.