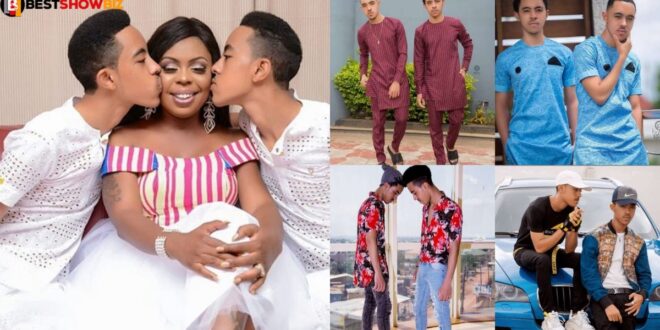 The paternity of Afia Schwarzenegger’s twin children has long been a point of controversy, and the renowned Ayisha Modi claims to have finally figured it out.

Ayisha, who is currently embroiled in a violent feud with Afia Schwarzenegger, is going for broke.

She’s now drawn all three of Afia’s children into the fight, starting with the young Adiepena and moving on to the twin boys.

Ayisha claims that Afia has always claimed that her twin children have a German father.

Modi claims to know who the twins’ father is and that he is not a German, but rather an elderly American named John.

If Afia Schwarzenegger does not shut up and stop antagonizing her, Ayisha claims she has all the information she needs to expose him to the world.

She challenged Afia to reveal to the world her children’s passports if she could.

“Madam, if you don’t quiet talking, I’m going to take you down because guess what I found.” He is not a German, and he is the father of your sons. John is a senior citizen from the United States.

“Dare me once more, and I’ll come live with @empressbingy and she’ll tell the entire world your true story. Your entire life story on the internet is a lie, just like your lips. Madam, I am a Zongo girl with a Zongo spirit ooo and a Ga. SIA at the same time. This conflict will end in 2032, and that is a certain. “Come curse yourself once again, SIA,” she retorted.

Read Also  zionfelix girlfriend Erica advises women not to love too much as she hints on broken heart.

Her assertion that Afia Schwarzenegger abandoned her twins in Ghana for seven years to prostitute herself in South Africa for money prompted her to write this post.

She showed a woman she claims was caring for the children when Afia abandoned them in South Africa to sell her body.