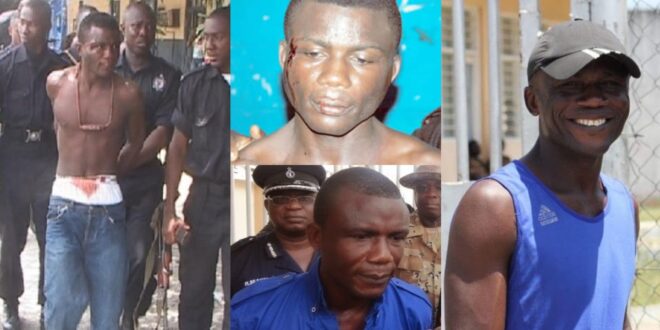 Read the full story of the famous Ghanaian armed robber Atta Ayi, who was sentenced to 160 years in prison.

If you were born in the late 1980s and the early 1990s, you’ve almost definitely heard of Atta Ayi. Because of his notoriety and tenacity in his profession, he was a household name.

Raymond Ayee Ayeetey was born in the Accra suburb of Adabraka. He was a school-aged child until he dropped out in fourth grade after his mother went to the United Kingdom. Ataa Ayi learned to drive and went on to work as a taxi driver.

In an interview with one of the media outlets, he said how in 1998, he drove someone to a festival in Okropong and then got into an accident on the way back, totaling his master’s vehicle. He returned to Accra without a career and a mortgage. When looking for work…

Another Eddie who wanted a skilled driver was introduced to him by a neighbor. This professional driver was needed for car theft. Ataa Ayi came on board to assist him in his illegal activities. He was initially dissatisfied when he discovered that his work entailed helping auto looters.

However, he required the funds for his pregnant wife as well as his business ambitions. In order to get money, Ataa Ayi joined a gang of car thieves. This gang’s plan entailed following people who went to the bank to borrow money, threatening them, and taking their money.

Ataa Ayi’s first heist was in 1999, when he and his gang stole 12 million cedis, 2.5 million of which he kept. The gang came across a gun in a police car one fateful day and took it. They decided to employ it in their criminal activities, but none of them knew how to do so effectively.

The gang kidnapped people and robbed banks and buses. The frequency of these actions led others to suspect he possessed protective charms that shielded him from bullets and police officers. One day, a victim told how he was robbed in the middle of the street.

They walked into an office and were greeted by a pastor who was inspecting the cash register.

His surname became a popular household name and a thief’s nickname. In the year 2000, police went to Chorkor in search of Ataa Ayi after receiving a tip, but he was attending a funeral. He went into hiding after realizing how he wanted to be. The cops went to every single location where he might have been working and staying. Except for Ataa Ayi, all of his gang members were captured or killed during the search.

Also the most vicious criminals, however, will be apprehended one day. Ataa Ayi was staying at Nungua while looking after his elder sister’s home. The tenants in the house got into an altercation, and his sister’s daughter mocked him.

The occupant was then attacked by Ataa Ayi, and the matter was reported to the police. On February 28, 2005, the police arrived at his home and discovered him drying his clothing. They came to apprehend him on battery charges only to discover he was the country’s most wanted fugitive.

He was apprehended while begging the cops not to kill him on his knees. Ataa Ayi said he was tortured and threatened into signing documents, some of which he says were false, while in detention.

He also believed that the majority of the jurors who appeared against him at his conviction lied, but he was satisfied with his punishment. He was later sentenced to 160 years in jail with hard labour, and he is now serving his term at Cape Coast’s Ankaful Maximum Security Prisons.

Ataa Ayi is now a priest in jail, repenting of his previous deeds and sins and accepting Jesus as his savior. Ataa Ayi continues to beg the government for forgiveness. On his release, he wants to become a better pastor.