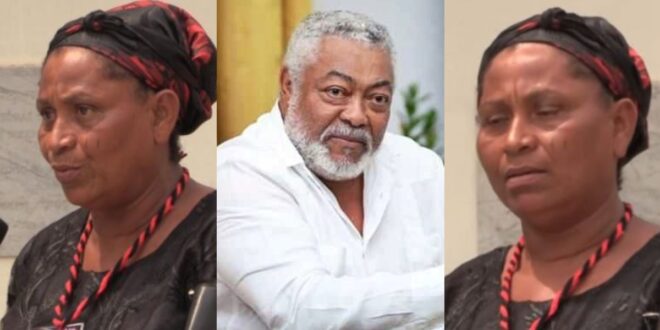 close family confirms the ‘mystery’ daughter of Rawlings is true

Most of us have been wondering if it’s actually true that the 52-year-old Abigail Mawutor truly the daughter of the late J.J Rawlings.

Well, aside from her resemblance to Mr. Rawlings, it appears that the ‘mystery’ 52-year-old daughter of the former President reportedly has a daughter who looks exactly like Zanetor.

from reports, some family members of Rawlings from the Volta Region have spoken undercover and has praised Abigal Mawutor for participating in all Agbotui family events and activities at Dzelukope since the family discovered her but has never made up in the news until now.

Though there were things that could be done to save the situation before Rawlings passed away, the family believes the 52-year-old Abigail came out to the media with grief as a result of lacking a chance to mourn her father correctly.

The story goes that in 1967, Rawlings in their final year of secondary school, aged 20 then, allegedly impregnated Rose Agbodzi Sende, an Ewe in Accra but originally from Togo. The young Rawlings allegedly pleaded with Rose to keep the pregnancy secret because his future was at stake, to which Rose agreed.

In March 1968, Abigail was born to a single mother, the same year Rawlings, 21, was settling down as an Airforce Cadet.

Rose met someone willing to marry her and left her child Abigail with an old lady at Adabraka in Accra where the child grew up, knowing she had only a mother, and not knowing her father.

MyNewsGh.com sighted an Eyewitness who was her mate in Primary school and corroborated her story.

“I know this beautiful lady back in the days, she attended St Joseph Primary School at Adabraka. The rumors were rife then that Rawlings was her father.”

This will not be surprising because, by the time Abigail would have turned 12, her “father’s” face and name were known nationwide, especially in the Adabraka areas where she lived with an old woman caretaker.

While it was rumored her father was Rawlings, some of her caretaker’s neighbors spread rumors that she was a “fatherless bastard”.

Finding her father
In an effort to find her father as an adult, Abigail confronted her mother, Rose A. Sende about who her father was, whereupon she was told the whole story about what happened in 1967 and how Rawlings was her father.

Read Also  "My Intelligent son was denied admission to Achimota Because of his dreadlocks"- Rasta Father cries.

Abigail has said in an interview that before her mother opened up about Rawlings, she had had numerous dreams involving Jerry Rawlings as head of state.

The young daughter started looking for Rawlings after her mother’s confession and found her way to Rawlings family home in 2002 where she was accepted. A member of the family who spoke on strict condition of anonymity said prior to her appearance, they had heard from some travelers from Togo saying there was a lady at Lome claiming Rawlings was her father, hence meeting her was bound to happen somehow.

It must be stated that contrary to reports, no one in the family remembers any photograph Rawlings ordered circulated to find the girl.  Several attempts to reach Grace Omaboe (Maame Dokono) for some additional facts were futile.

According to sources, when Rawlings was informed of her sudden appearance and claim, he neither denied nor confirmed it. However at various times, he enquired about her, and on a number of occasions since 2002, he acknowledged her by sending her money for upkeep and to start a business.

It is not clear whether Rawlings gathered the courage to inform his wife and her children about the existence of Abigail as a long lost but found daughter if he accepted her.

We can therefore say that the story of the 52-year-old Rawlings daughter could be true but has been a well-guarded open secret, unknown only to Rawlings nuclear family in Accra if he didn’t inform them before his death. However, the Volta side of the family knew of her existence.

The basic facts as gathered by MyNewsGh.com are that Rawlings, born June 1947 completed Achimota O’Level in 1967 and joined the military academy at Teshie the same year, before moving on to the air force the following year. Rose Agbodzi Sende allegedly got pregnant for him in 1967 and gave birth to Abigail Mawutor [Rawlings] in March 1968.
Rose got married and left her child behind in the care of an old relative at Adabraka where the child grew up before later making efforts to reach out to the family in 2002 and has been with them until the larger public heard about her yesterday.