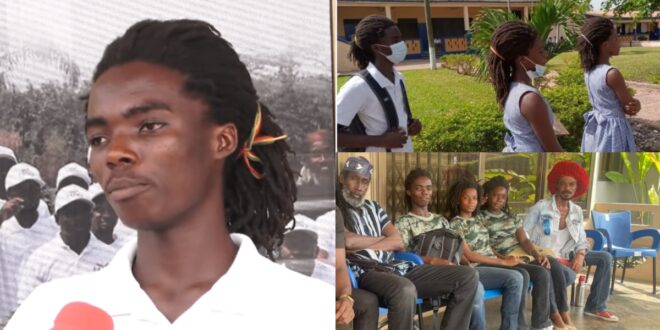 The family of a student who was refused entry to the Achimota School because of his dreadlocks has filed a discrimination lawsuit against the school in a high court.

Tyrone Iras Marhguy, the student, alleges that the school’s actions are infringement on his rights in a complaint published by Citi News.

They want a compensation that refusing Tyrone Iras Marhguy entry because he wears dreadlocks is “a denial of his right to education granted under Articles 25(1)(b) and 28(4) of the 1992 Constitution.”

The family pleaded in the case that “there is no legal ground for [Achimota School] to conflict with the applicant’s right to education depending on his rasta by which he manifests or communicates his legally protected right to faith and to observe and manifest same.”

They want “an order aimed at [Achimota School] to immediately enroll the claimant in order for him to pursue his schooling without delay.”

They still seek money for the “inconvenience, humiliation, time wasting, and infringement of his basic human rights and freedoms.”

Tyrone Iras Marhguy, along with another Rastafarian student, Oheneba Kwaku Nkrabea, was refused admission to the school.

The drama has been going on since March 19, when the two students were unable to begin academic work with their classmates.

They were assigned to the school through the Computerized School Selection and Placement Method (CSSPS), after completing their Basic Education Certificate Test with honors (BECE).

The findings of Tyrone Iras Marhguy’s doctoral work is added to the case to show his academic integrity.

The school had instructed the parents to either cut their children’s hair or find them a new school.

The Achimota School PTA defended the school’s decision, arguing that its updated rules and regulations, effective August 2020, state that students must keep their hair short, plain, and normal.