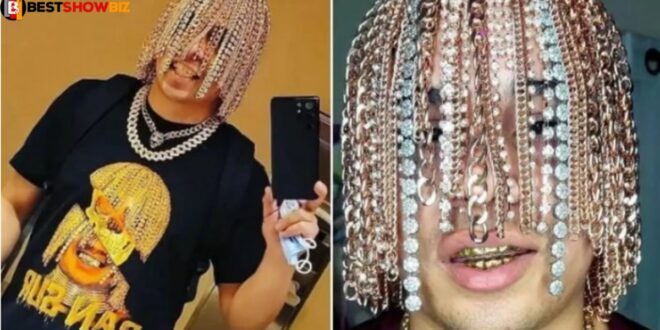 When it comes to the notion of a “golden boy,” Dan Sur, a 23-year-old Mexican rapper, has taken it to a whole new level by having gold chains implanted in his head as his hair because he “wanted to do something unusual,” he says.
With nearly two million social media followers on TikTok, the reggaeton musician revealed his new look to the surprise of his fans in a new video that he shared on his own channel. He expresses his displeasure with anyone who attempts to emulate his style.
“It’s true that I wanted to do something different because it seems like everyone is dying their hair these days. I hope no one else follows in my footsteps now “he explained.

“I have it as a hook that is implanted in my head, and that hook has hooks, and they are all hooked in my skull, under my skin,” he explained after confirming that he had surgery to get the look.

“This is a picture of my hair. Hair that is golden in color. He is the world’s first rapper to have gold hair implanted in his head in recorded history “He went on to say more. Dan Sur decided to go one step farther than just having golden hair by getting a matching gold grill, which he proudly displays anytime he opens his lips.

In addition, the Mexican rapper released a TikTok video below, in which he can be seen scrubbing his grill teeth with toothpaste in response to a fan who had inquired about how he maintains his grill/teeth clean.
The rapper Lil Uzi Vert, who went popular earlier this year after spending $24 million on a “natural” pink diamond that was placed in his forehead, is credited with inspiring Dan Sur’s gold chains hair, according to some on social media.

Although he has not been seen with the diamong on his forehead, Vert, 26, claims that a fan tore it from his face during the Rolling Loud music event in July and that he was only just able to rescue it by jumping into the crowd.

In an interview with TMZ, he stated, “I’m feeling okay, and I still have the diamond, so I feel good.”