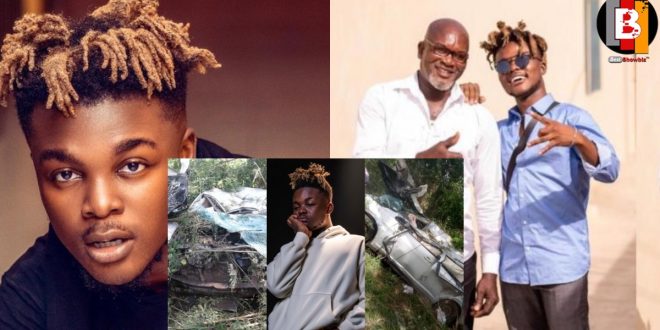 Very Sad: Quamina MP’s Father Dies After The Two Were Involved In A Fatal Accident | Photo

Sensational rapper Quamina MP has reportedly lost his father – according to a reliable source _ after the two recently got involved in a fatal accident yesterday, Nov. 26, 2020.

The incident as earlier reported happened on the Akosombo Road in the Eastern Region and the father and son were said to have been travelling when the tragic incident occurred.

At the spot, Quamina MP’s father sustained some critical injuries and was rushed to the hospital while the rapper, on the other hand, escaped narrowly.

Footages from the crash site showed the level of damages the ground up rapper’s saloon car sustained – which is at a point beyond repair.

However, new sad reports reaching us indicate that the father of the “Wiase Y3 D3” singer has succumbed to his wounds after he was rushed for intensive care at the hospital