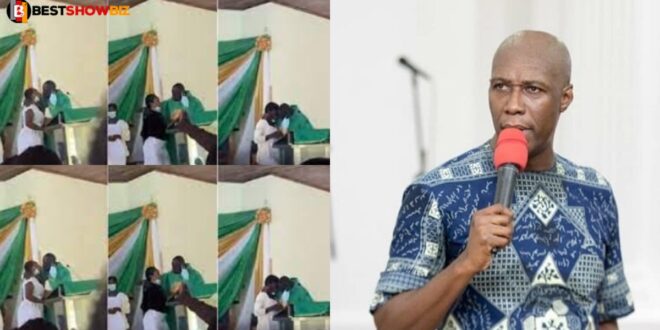 Alabaster Ministries Prophet Kofi Oduro has demanded that the Anglican priest who kissed three students be arrested and prosecuted.

Oduro went off in a video he posted on social media, demanding that Ghana’s laws be enforced and that the pedophile priest be imprisoned.

He chastised the preacher for disgracing God and advised him to sleep in the gutter if he wasn’t cut out to be a pastor.

He also stated that if being a man of God is too much labor for him, he can find some ‘ofos’ (secondhand apparel) to sell.

“What sort of pressure is in a pastor’s loins for him to stand before a whole assembly and be kissing little girls?” he wondered.

Read Also  Medikal to run for President in the next 20 years; has revealed his political ambition

In an enthusiastic voice, he repeated the word “gyimie” (fool).

“This is an obvious crime, and the law of this country must take its course!” Oduro said.

His rage came after a viral video of a priest hugging female students at Mampong’s St Monica’s College went viral.