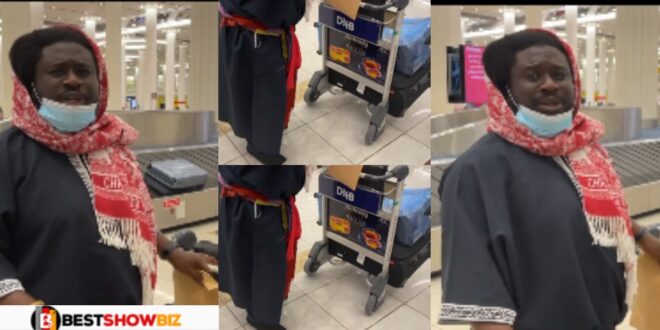 Reverend Ajagurajah, also known as Bishop Kwabena Boakye Asiamah, told how officials at a UAE airport mistook him for a lunatic because of his appearance.

Ajagurajah was seen checking out of an airport after arriving in Dubai in a new video posted to Instagram.  As he moved his bags out of the airport, the Universal Spiritual Church’s founder and leader addressed the misunderstanding.

Officials at the airport, he claimed, couldn’t understand why someone would come to the airport dressed like that.
He, on the other hand, said he was unconcerned about the tag placed on him by airport officials because of his appearance.

A crimson muffler scarf was tied around the preacher’s waist, and he was dressed in a black overall over a pair of slacks. He was also seen without any shoes on, wearing only a pair of black socks.

“They thought I was mad for dressing like this to the airport” Ajagurajah captioned the video after it was released.