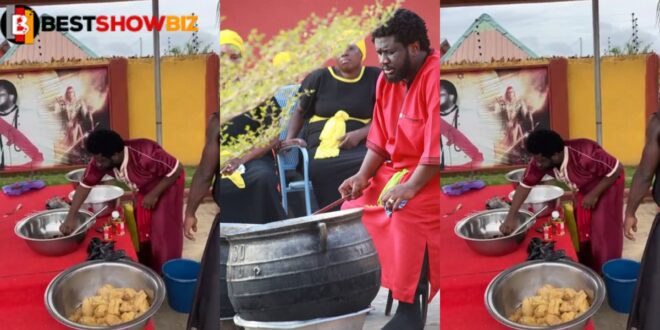 Bishop Kwabena Boakye Asiamah has recently made headlines for a variety of reasons. Normally, he gets engulfed in scandal after controversy.

Although many people refer to him as Prophet Ajagurajah, he prefers to be known as ‘Killer Nkuto,’ or ‘Chop Bar Pastor.’ He claims that Ajagurajah is not the true driving force behind the movement.

The guy of the Ajagurajah organization made headlines last week when he held a Fufu communion on his service grounds. Many members of his hidden church visited the premises to get a feel for the atmosphere. It is a well-known fact that no one leaves church hungry.

Father’s Day is today, Sunday, June 20, 2021, and the pastor of ‘Block Nation’ has arranged a special Father’s Day service. A kenkey party characterized the service. The members were treated to a feast of keykey and mackerel. Later in the day, the prophet stated, there would be a waakye feast with several types of meat, followed by a light soup service as a dessert.