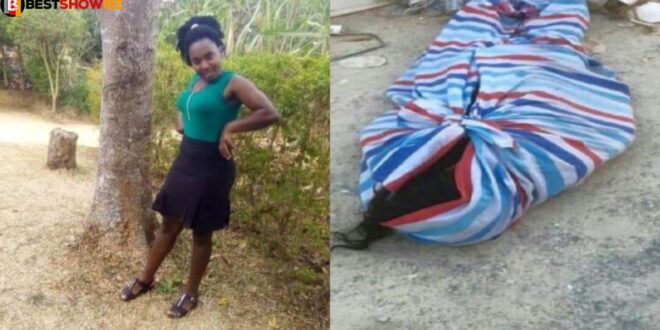 Primary 5 teacher Jennifer found murdered, boyfriend believed to be suspect but is nowhere to be found

Mrs Florence Akuamoah, Jennifer’s mother, told the Dakojom Police Service that her daughter was delighted to return home after being released from school on Tuesday, August 10, 2021.

Jennifer informed her mother on Monday, August 9th, that she would be coming to spend the holidays with them if she was able to get out of school the next day.

Jennifer’s mother, Florence Akuamoah, said her daughter on Tuesday afternoon revealed that she was getting ready to pick up a car from Dakojom and drive to Krofrom, where her parents lived.

On Tuesday evening, the Akuamoah family waited for their daughter, but she never arrived.

When Jennifer’s phone didn’t work, her worried parents called the headmaster of St. Patrick’s Preparatory to check on her.

Jennifer never left Dakojom on Tuesday afternoon, according to the headmaster, following a thorough investigation.

An informant informed the police that a body had been dumped at the Dakojom SDA crossroads.

The body discovered this morning turned out to be that of Akuamoah Jennifer, a St. Patrick’s Preparatory School class 5 teacher.

On verifying the news this afternoon, Police Corporal Dangue Benjamin claimed that they are still investigating the matter, but that many eyewitnesses have corroborated seeing James Adu at the crime scene before Jennifer was murdered, making him the officer’s first suspect.

Jennifer was discovered dead this morning wearing a green shirt and a black skirt, the same outfit she had worn to school on Tuesday.

Jennifer had been physically mistreated by her lover, Adu James, according to Nurud Offeh, a Science teacher at St. Patrick’s Preparatory and a friend of Jennifer’s, who told Dakojom Police officers that Jennifer wanted to spend the vacation with her parents so she could determine what to do.

Jennifer had reported the violent boyfriend to his parents twelve times, but they never intervened, according to Nurud. They are all responsible for Jennifer’s murder, he claims.

Mr. Adu Isaac, Jennifer’s boyfriend’s father, declined to comment on the matter, saying he hadn’t seen his son in over a week and couldn’t tell if he was guilty or not.