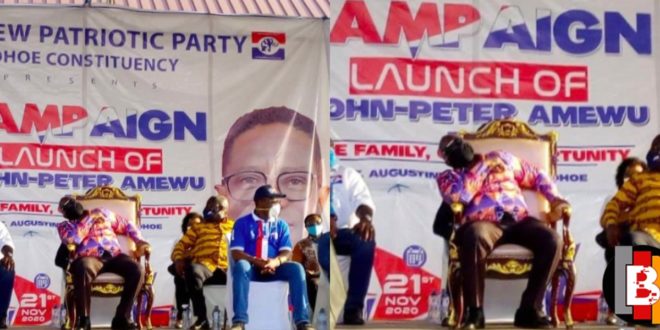 A disturbing photo of President Nana Addo has popped up and it has received mixed reaction as it captures him sleeping at an NPP campaign launch.

Akufo-Addo had just resumed his routine campaign after the death and mourning of the late Jerry John Rawlings and he took to the Volta Region precisely the Hohoe Constituency.

The president moved from community to community; assuring residents of his better plans he had for Ghana if they do him a favor by voting him into the office for the next four years.

After going through the busy day and finishing his talks, Nana Addo decided to rest on one of the seats – only to find himself taking a nap and this action has got Ghanaian on social media talking.

Most social media users say this is not the first time they have spotted the President sleeping at a campaign ground. Meanwhile, others are of the view that the photo is a misrepresentation.

What do you make of this?