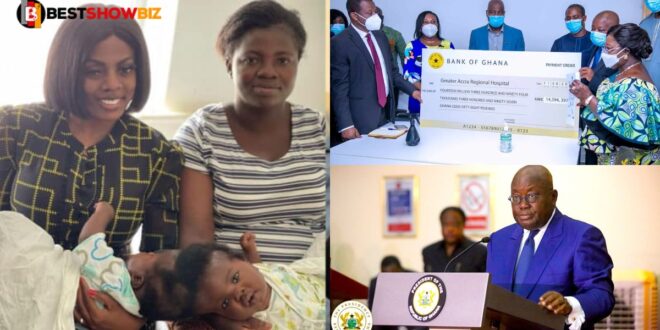 On Tuesday, August 31, 2021, the president fulfilled the government’s vow, according to Eugene Arhin, Director of Communications at Jubilee House.

Akosua Frema Osei-Opare, Chief of Staff to the President, has released GH14,394,397.58 for the procedure, which is slated to start in the second week of September.

The funds will cover the “cost of operation and the purchase of surgical equipment”, Mrs. Osei-Opare noted.

“President Akufo-Addo on Tuesday, 31st August 2021, fulfilled the pledge made by Government to pay for the full cost of the surgery of the conjoined twins at the Greater Accra Regional Hospital (Ridge Hospital),” the statement said.

“Through the Chief of Staff at the Office of the President, Hon. Akosua Frema Osei-Opare, an amount of GHS14,394,397.58 (cost of operation and the purchase of surgical equipment) has been released for the procedure, which is expected to commence in the second week of September.

These data place the President’s contribution at GHS11 million greater than originally pledged.

Lydia and Linda Awui were born to Rebecca Bansah, a 15-year-old girl who last month appealed to the public to help gather finances for the procedure.

Nana Aba Anamoah, a broadcast journalist and acting general manager of GHOne TV, saw the appeal and launched a fundraising effort to cover the whole cost of the surgery.

He also rented a completely equipped 5-bedroom property in North Ridge for the twins’ parents.