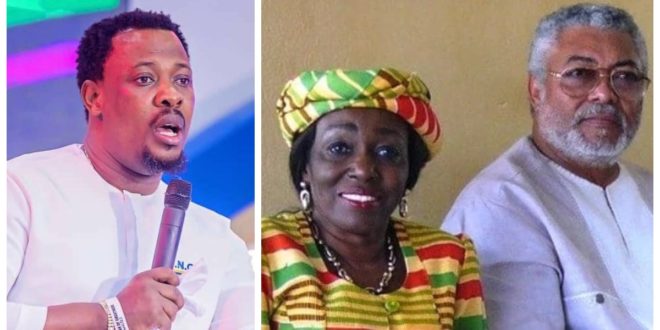 Remember Rawlings’s wife in prayers, I see darkness around her – Prophet Nigel Gaisie

The founder and leader of Prophetic Hill Chapel, Prophet Nigel Gaisie has called out on Ghanaians to remember the wife of the late former president, Jerry John Rawlings, Nana Konadu Agyemang-Rawlings in prayers.

according to the self-acclaimed man of God, he sees darkness around Nana Kodanu and prayers is the only thing to wipe it away.

the prophet was heard prophesying about the death of Rawlings’ during the 31st night of 2019 in viral audio.

“I seek the face of the Lord anytime the year is about to end at Adumfa. Among the prophecies for the year, God said we should pray for Rawlings and his household but because of the attacks on me and my prophecies, I decided to speak in figurative expression. People would have burnt my church if I had come out to say that former President Rawlings will die.”

during 31st night last year, Nigel said he saw a cloud covering Rawlings’s wife and asked people to pray for her.

“If she’s hearing me or she’ll watch, a prophetess prayed for her. I saw a cloud of darkness. I know the name but I have spoken figuratively”.

he further said everyone should take prophecies seriously and work on it when someone sees something about you.

“If someone dreams about you or a prophet prophesy upon your life, don’t take it as a joke…take action,”