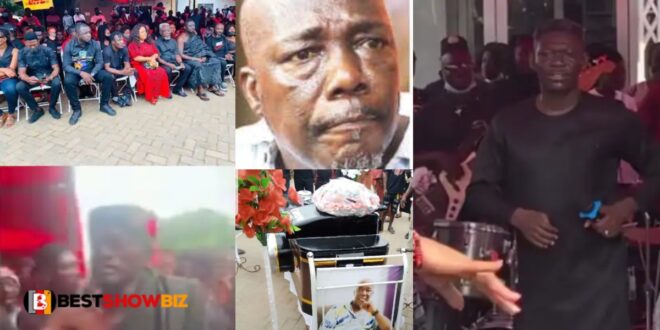 The burial rites for the late Kumawood actor Samuel Manu, commonly known as Agya Manu, was held at the Accra Arts Centre on Saturday, August 21.

He left five children and five grandkids when he died.

Some colleagues who arrived at the location not only expressed their condolences but also performed a little performance to tell him farewell.

After that, he was placed in a brown cannon camera-shaped coffin with his images adorning the sides. Many folks were astonished when they arrived. However, his family claims that he was buried in a casket shaped like a Canon digital camera to represent how he lived his life in the movie industry.

Read Also  Meet Konadu, the only GMB contestant to leave the show with a TV3 presenter as her husband
Share