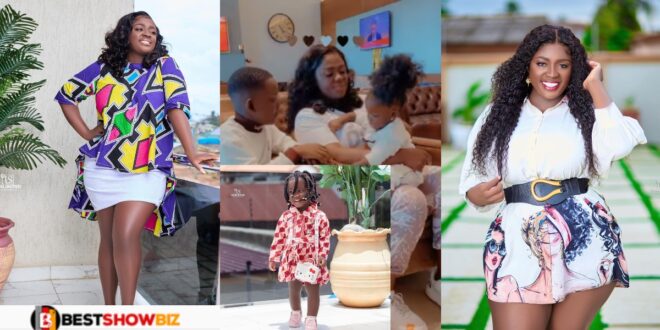 Tracey Boakye is said to be the mother of a third kid, who has now been disclosed to the world.

To be completely accurate, we know a few things about Tracey. She’s your favorite East Legon landlady, her dress sense is awe-inspiring, and she has two adorable children.

However, Aba the Great, a blogger, now claims Tracey has three children, one of whom she has kept hidden.

I’m not sure how a publicity-obsessed superstar like Tracey has managed to keep a full child hidden, but Aba believes she has.

Tracey has kept the child hidden from the public view, according to the troubled Instagram blogger, because she does not want another social media search for her third baby daddy.

Aba dropped the surprise by sharing a video of Tracey with her son.

“By the way, do y’all know Tracey Boakye has 3 children? The gist I wanted to give you all along. Tracey Boakye is a bad child, she knows how to keep a secret sha. She don’t want us to be looking for Daddy Tray, don’t worry, Aba will be taking a break from social media very soon… so u can be free wai,” she wrote.

We’ve known for a long time that Tracey had two children and was expecting a third, but the pregnancy didn’t pan out.

According to Aba, she already has a third child but keeps him or her hidden from the public eye.

Because she is someone who lives and breaths social media attention, if she is able to accomplish that, it will the greatest achievement of her life.