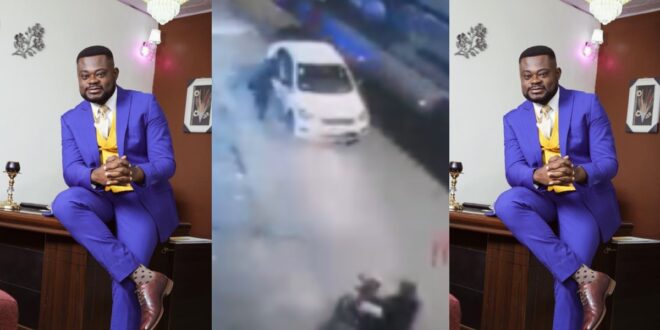 Apostle Gusteve Yeboah, a popular Ghanaian pastor who started the Refined Vessels Chapel International, tells his story of redemption, in which he admits to taking part in several robberies.

Apostle Gusteve said that he was part of a known robbery gang that made people in Kumasi afraid, especially in the areas around Ashtown and Kejetia.

He says he joined the mafia when he was a teenager and, like all new hires, went through a lot of training.

Not only did they strike dread into the hearts of the locals, but the apostle reported that they were heavy drug users. He believes that this contributed to his own mental health issues and made him more obstinate.

His family had put him under a lot of pressure, and he felt the need to support his mother, so he decided to join the bad boys.

Apostle Gustave said that he stole a lot from his father, who was his first victim. At some point in time, they engaged in a fistfight, and during the course of the fight, he inflicted machete cuts on his father.

According to what he says, the purpose behind it is to get revenge for the mistreatment he has meted out to his mother ever since he was a child.

The apostle said that he was a professional thief for a year and that he learned how to steal bags and took part in several thefts.

It required the arrest and imprisonment of the majority of his gang members to wake him up to his wayward ways. He claimed that it was at this tough time that he realized it was time to repent of his sins.

He treated religion with the respect it deserved, and as a result, he was ordained as a charismatic prophetic preacher.

Apostle Gusteve Yeboah pleaded with the young people to turn away from their wicked ways and seek the kingdom of God, which he asserted had the ability to save them.