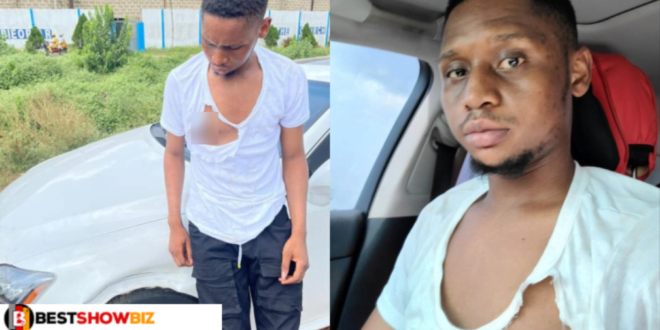 A young Nigerian man has recounted how police officers wreaked havoc on him merely because of the car he drove.
According to him, a car rammed into his car, and when he came down to inspect the damage, roughly 6 officers attacked him from the car that smashed him.

They harassed him and confiscated his smartphone, threatening to hand him over to the EFCC if he did not comply with their demands, but when he insisted on being transported to the anti-graft agency, they slapped him, tore his clothes, and pushed him into their vehicle.

On the way to the office, the young man stated that they then decided to extort him, but he refused to give them any money and remained firm.

They eventually transported him to a remote location and dropped him off.

“I was mercilessly harassed by police officers claiming to be Interpol on my trip to Lagos from Ibadan,” he added. I came down from my car when I discovered a foreign car had smashed me, and they (six in total) came with firearms and claimed they would take me to Lokoja @SavvyRinu.

I informed them that I would not be following them until

Omoo one kind of mad slap hit me like this ehnn my head blanked out and I entered with tears in my eyes.

On our journey to Efcc, they just cooled down and asked me to do things normally, and I obviously denied giving them anything, and they drove me to a bush in Ogere where they decided to let me go. The officers who are supposed to protect us are the ones harassing us. I’m in discomfort.

The most agonizing part was that others stood by and watched while I was beaten on the road. Because I drive a Lexus, I’m handcuffed like a criminal. This country hurts me on a regular basis.”

I tried to contact someone first, but they grabbed my phones and claimed they would drive me to @officialEFCC, which I told them I would prefer because I was detained and cleared by Efcc in May, but they changed their minds and forced me to into their car. That’s how one just rushed me with slaps and upper cuts, tearing my shirt while I struggled not to enter their car…