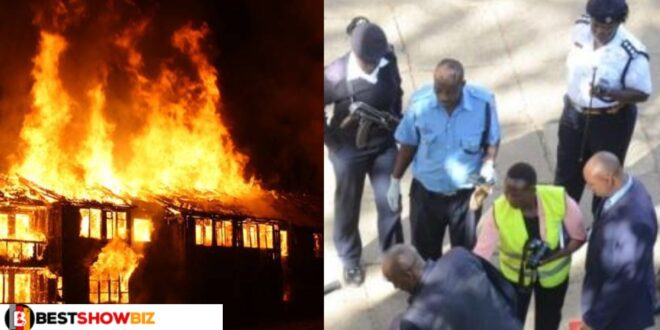 According to a source, a police officer set his girlfriend’s house on fire after she failed to visit him.

On November 23rd, a police officer identified as Sergeant Senya Saviour is said to have carried out the attack.

the police officer was enraged with his girlfriend for failing to visit him as promised a few days earlier and stormed her house on November 21st, only to be met by her non-arrival According to the source.

He eventually left the house after breaking one of the windows.

He returned the next day under the pretense of repairing the window he had destroyed, only to pack all of Eunice’s belongings from the house, according to the report.

Sergent went to the auntie of Eunice’s auntie’s pub to look for her, but she was not there either.

When he arrived at the pub, some eyewitnesses claimed they saw him holding a gallon that contained petrol.

He returned to the house she shared with her auntie on November 23rd around 1 p.m., still unable to see her, and set the house on fire.

The fire started in her auntie’s room and spread to a total of about five other rooms, all of which were occupied by other tenants and the landlord.

The policeman did not stop there, according to the report, as five days later he stormed the pub again and set it on fire.

Read Also  Angry Wife Chops Off Husband's D!ck For Cheating On Her - Photos

The auntie and the landlord have since reported the incident to the Ghana police.