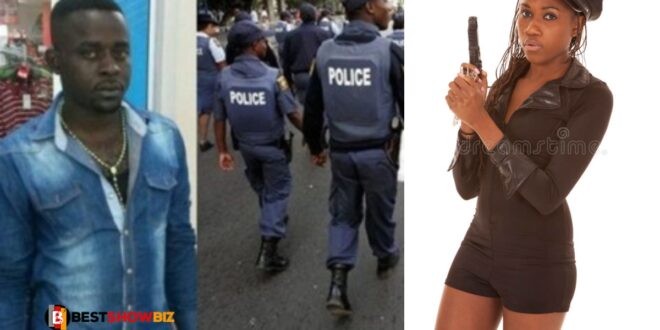 Jennifer, a woman, was detained for allegedly taking a firearm from CSP Adegoke Akinlade, a Denton Divisional Police Officer.

According to The Punch, Madueke and Akinlade were briefly dating, but their relationship ended when the cop was relocated out of Lagos over seven years ago.

However, fortune smiled on them when they reunited and swapped phone numbers in 2021.

“That was when the DPO, who was married at the time, proposed that they continue their relationship,” a source told the publication. On Friday, August 27, he invited the lady to his workplace and slept with her until Saturday morning.Around 5 a.m., he let her go and even escorted her to the bus stop.

“They didn’t see each other again until last Saturday, September 4, when he invited the girl out.

“However, he detained her and accused her of stealing his service pistol when she went to see him. He held her in his cell until September 6th. He urged his boys to torture the girl while she was in the jail in order for her to make confessional admissions.

“That Monday, around 8 a.m., he took her to a herbalist on Jebba Street in Ebute Meta. The herbalist claimed that the girl had taken the pistol, but she refuted the claim. He then took her to the SCIID in Yaba, where she has been held since then. “

Akinlade, who admitted to losing his pistol, claimed it was taken by Madueke, who he also accused of stealing N50,000 from him. He denied sleeping in his office with her or taking her to a herbalist.

“She was my girlfriend in 2011, but we split up,” he explained. She came to welcome me about a month and a half ago while I was in the Stadium area, and that’s how she found out where I worked and started coming. I told her not to come back after her visit did not benefit me.

“I was at a club with one of my friends on that Friday. A girlfriend showed up to meet me there. Then this lady arrived. I had no idea she was on a mission. I escorted her away and explained that I was preoccupied.

“The other woman with me said she was going to Bariga. She also showed up there, but stated that due to the late hour, she would not be able to obtain a vehicle to drive to her home that night. I then went out on a night patrol and left them (both ladies) at the office.

“It was then that I decided to go back and wake them up. I handed her N4,000 (transport ticket) when I got back.”

he answered when asked if he slept with Madueke. “I didn’t have any sexual relations with her. They were left where they were. She had gone behind my chair, unnoticed, to pick up a bag. When she went, I noticed that my pistol had gone missing, along with N50,000. I didn’t care about the money; I just kept calling her, and she didn’t answer. She also deactivated my WhatsApp account.

We went to prayer houses and sought advice from alfas, myself and the other female, but we were unable to locate her. I hadn’t seen her in a week. I paid somebody to keep an eye on her.”