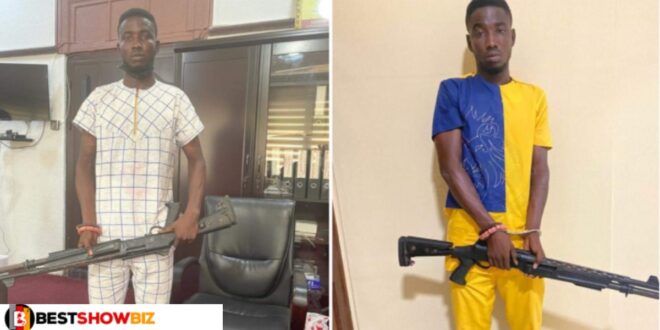 Police in Ghana apprehends a man for brandishing a gun and making threats on social media.

Nii Ponponsuo, who was seen brandishing a pump-action gun in a viral video on social media, was arrested by the police.

In the viral video, the suspect can be seen loading cartridges into the pump-action gun and making threatening gestures.

He is scheduled to appear in court on Wednesday, November 24, 2021.

The Ghana Police Service announced on Facebook that the suspect was apprehended on November 22, 2021, after the Police Intelligence Directorate conducted a special exercise that led to his arrest.

“After reviewing the video, the police conducted a special exercise, which resulted in the suspect’s arrest from his hideout.” “A search resulted in the recovery of one 12 bore SB pump-action gun,” according to the Facebook post.
The suspect is currently assisting the police with their investigation.