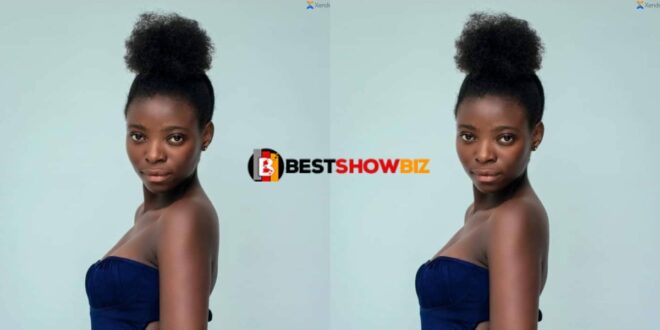 Police have identified a young lady they suspect is responsible for the murder of missing Gh Media Institute student Priscilla Tsegah and are on the lookout for her.

CCTV evidence from the hotel where Priscilla’s body was later discovered revealed that she was staying there with a close friend, another woman, who is the main suspect in her death.

The two girls can be seen entering the hotel together and booking a room together on CCTV footage.

The ladies stayed in the hotel room for a while, but one of them eventually emerged.

It was the other lady who disguised herself by dressing in Priscilla’s straight dress and carrying her back pack as she departed the crime scene.

She had allegedly stabbed Priscilla with a knife for an unknown purpose, then fled dressed as her and taking the hotel key with her.

Priscilla had gone missing about that time and was only discovered a short time afterwards.

She was found in that hotel room, n*ked and stabbed in the abdomen with a kitchen knife, according to sources.

On TV, Hitz Fm’s Prince Tsegah, a relative of the murdered Priscilla, described everything that happened.

“Priscilla was discovered naked in a pool of blood with a kitchen knife in her abdomen, and it appeared that she had been dragged into the blood pool or that she had attempted to move,” Prince Tsegah added.