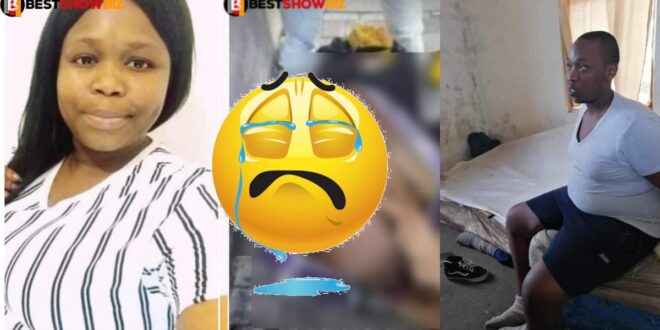 Police arrest man who k!lled and cut his girlfriend to pieces putting her body in a suitcase

In Quigney, East Cape, South Africa, the dismembered body of Nosicelo, a 23-year-old law student, was discovered in a bag.

On Thursday, August 19, some of the victim’s other body parts were located in a black garbage bag close to the suitcase, while her head was discovered in a cupboard in her home.

A motorist hailed down police on patrol about 7 a.m. on Thursday, notifying them that a body had been discovered in a bag. Shortly after police arrived at the crime site, the 25-year-old suspect was captured.

Police patrolling the area early Thursday morning were hailed down by a motorist who informed them of what he had witnessed, according to Brig Tembinkosi Kinana.

“They discovered a bag containing the body of a 23-year-old female when they arrived at the crossroads of Fleet Street and Fitzpatrick Road. It was located close to a black bag containing other body parts.

“Police received word that a 25-year-old suspect suspected of being engaged in the murder had been discovered and apprehended while on the scene,” Kinana said.

“A plastic bag containing other body parts was discovered in a house after further examination. “She was apparently studying law at Fort Hare University in East London,” Kinana continued.

According to Kinana, preliminary investigations revealed that the suspect and the dead had been living together for some time.

“This is a heartbreaking scene that no woman wants to watch during Women’s Month.” “The incidence demonstrates the pervasiveness of gender-based violence and femicide incidents in our society,” Ntshinga added.

In the meantime, Alutha Pasile, the suspect, is due in court on Friday, August 20. He is accused of murder.