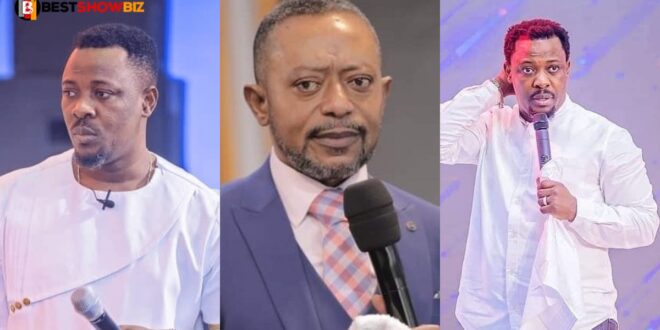 Prophet Nigel Gaisie, General Overseer of the Prophet Hill Chapel, has pleaded with the court and authorities to be gentle with his fellow pastor, Rev Owusu Bempah.

In an interview with Okay FM, Prophet Nigel Gaisie urged the government and the courts to be mindful of Prophet Owusu Bempah.

According to him, the NPP should be doing more for “their prophet,” whom they have abandoned to doom.

“I don’t care whoever he has offended, considering what he has done for them that brought them into power. It cannot be commiserated with those whom it has offended. If you weigh the two, I think that his positivity outstands or outshines his negativity. I mean, he has helped you to power in whichever way he has given you power. Whether we like it or not, the next three years will be difficult for all of us. And he was very vocal.

Read Also  "God has revealed to me that Akuffo Addo and his minister will chop the $100 million meant for Corona"- Prophet badu Kobi.

Prophet Nigel Giasie also requested that the courts recognize and treat him as a man of God.

“I am not saying the law should not work. The law has arrested him. Where he was arrested was wrong. He has been locked up in a cell. I feel that they should be gracious enough considering the fact that people do worse things than that, and they are walking.

So for me, maybe someone would say that Prophet Nigel should speak well, but to me, he is a man of God. And I respect the oil in his life. So I saw that they should have been more gracious, and they should temper justice with mercy. “

As we reported earlier, Rev. Owusu Bempah has been accused of threatening the life of Nana Agraada. In addition, he and five members of his congregation were charged with offensive conduct resulting in a breach of the peace.