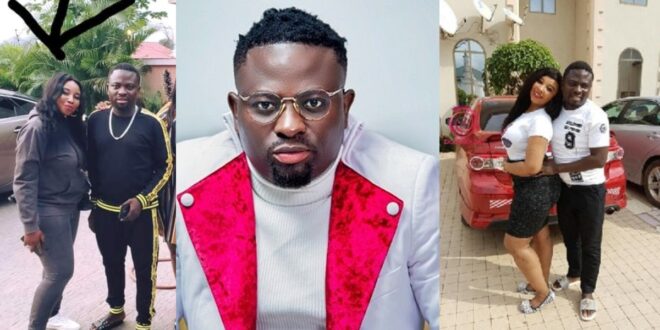 Following the various adultery charges leveled against him, gospel singer Brother Sammy aka The Nations Worshipper has reportedly revealed his wife’s face.

Brother Sammy has been in the headlines for a long time as a result of some of his remarks and rumors that he has been having an extramarital affair.

He was recently accused of warming the bed of Tracey Boakye, a Kumawood actress and actor, but he has denied the allegations.

He claims that despite the fact that his wife lives outside the country, he has never cheated on her.

Brother Sammy still takes advantage of the opportunity to brag about how broad his wife’s backside is, claiming that no circumstance will ever force him to cheat on her.

Well, it appears that his wife is fed up with the numerous accusations of adultery made against her husband and has chosen to eventually reveal her face.

In a recently discovered picture, Brother Sammy is seen with his mom, Kumawood actress Nayas, and another male.