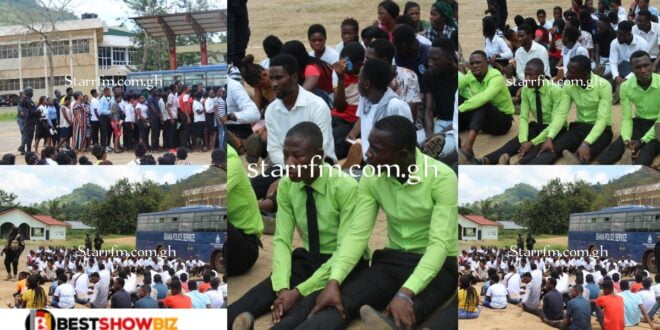 Photos: Police arrest dozens of QNET agents and recruiters for scam in Koforidua

Police in Koforidua have arrested dozens of Qnet Agents and recruits.

On Friday, police and ambulance personnel from the Huhunya Counter-Terrorism and Concentration Camp conducted a special operation targeting Qnet agents and their victims.

Some suspects are from West Africa. Among the Qnet recruits were mothers with children. They were arrested for scamming hundreds of people.

Deceptive business modules are used by many Independent Representatives (IRs) in Koforidua, the Eastern Regional capital, to recruit people as independent representatives.

A four-bedroom walled house was unearthed at Koforidua Adweso-Mile 50. Several desperate unemployed kids sat under tents in the house, some in suits and ties. Soon after, a self-proclaimed pastor joined them in worship and gave an encouraging sermon.

Five people, two of them were ladies, were already seated in the room when they were usher into it. They had been introduced to the business by an Independent agent.

After 20 minutes, a young man entered to present the business modules. For example, Qnet has sponsored FIFA, CAF, Manchester City WHO, UNICEF, and ECOWAS.

He showed how an Independent Representative may earn up to $76,725 per month after four years of joining the network marketing organization and promoting its items to other consumers who also recommend others.

Elvis Nelson Ayittey, Manager and Qnet agent, indicated that to become an Independent Representative, one must acquire a form for Ghc100, pay Ghc4,200 for an online purchase, and pay Ghc400 hostel fee.

An online dollar account would be created after payment for the individual to collect commission twice everyday after referring two individuals to purchase a product.

“You must first buy a product to join this firm. I hope he told you the costs. The chi-pendant is Ghc4,200 and the bio-dic is Ghc4,300. We can help you secure an account without acquiring the merchandise that costs GHC2,800. The corporation operates in 184 countries, 42 of which are in Africa. So, we will create an international account for you to purchase the merchandise. This is an E-commerce business, therefore you can do it to attach any work you do. Come and stay here for Ghc4,600 or Ghc4,700” said
“Product advertising is not about the amount of individuals you will promote to. It is a collective effort. Since I started this business on April 16th, my life has transformed. I have numerous. I work at Cape Coast. You will be paid weekly. You will make $5000 weekly if you recruit 60 people. So, join us. So, will you fill the form? You can pay in installments. The forms start at GH100. The manager was taped.

New recruits are forced to register for online certificate and degree courses reportedly linked with Quest International University. Depending on the course, he said diplomas and degrees will be awarded.

Quest International University has not responded to an email sent on January 13, 2021.

The story was similar in Okorase, a town neighboring Koforidua, where another spy was active. Many young people came to the claimed Qnet agent’s compound for training after paying large sums of money to buy a product online and hope to be registered as Independent Representatives to start earning the promised commissions.

The following stop was a place where West African nationals were also working as Qnet Agents in Okorase.

Most are Burkinabe, Nigerian, or Mali. Agentes tell their victims from Mali and Burkina Faso that they have landed lucrative jobs in Ghana.

Victims are required to pay large sums to start work. After paying the fees, they are held hostage to be taught as Qnet Independent Representatives online. Victims’ phones are taken to prevent communication with loved ones.

Before being released, the victims must persuade two people from their respective nations to come to Ghana to work for them. Recently, scores of West African nationals were arrested in Bornya, a suburb of Koforidua, after a new victim fled from the agent’s custody.

Quoting QNET as a direct selling organization that provides unique high-quality products and services while allowing clients to create a business selling the products. Qnet sells online to customers.

Other products traded by the company include education and electricity.

Independent representatives (IRs) of the company receive $250 compensation after introducing the products to six people, three on each side of them (two ‘legs’). When an IR refers a new customer who wishes to become an IR, the original IR benefits (by collecting bonus points).

These extra points only accumulate on one IR leg. For the monthly commission, the IR must introduce the product to a new consumer and become an IR.

On February 22nd and 23rd, 2018, Qnet Ghana hosted its first Absolute Living Expo, which drew several stakeholders and the public. The Ministry of Trade & Industry and the Ministry of Business Development were highly represented.

The Association of Ghana Industries was also present at the Expo at the Accra International Conference Centre.

“We are happy to have QNET in Ghana for the long haul,” said Joe Tackie, Chief Director of the Ministry of Business Development. Glad QNET’s business module fosters entrepreneurship. QNET, which has been around for 20 years and operates in over 100 countries, believes Ghanaians will greatly benefit from the health, nutritional, and entrepreneurial initiatives QNET brings to Ghana.

Abankwa stated that QNET’s entry into Ghana will create more opportunities for young people and Ghanaians in general to become entrepreneurs.

Qnet Ghana’s response to some of the results is as follows.

As a firm, Qnet requires a start-up capital.

So you will need a capital to start…. And a representative…. In our business, teamwork is critical to success.

“Education is part of our business areas if you meet the standards you can enroll in any of our Universities…. And start offering a course on your preferred e-learning platform.”

People from far areas limiting themselves inside rooms are not part of the business concept, according to Qnet Ghana. But new representatives can decide to work together to find a home to expand their business…… Because Qnet is a global corporation, you can do business with us from any perspective.