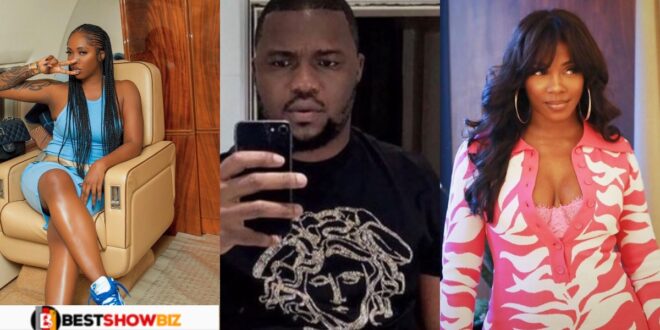 Remember how Tiwa Savage recently complained that a video of her having sex with her new lover was being used to blackmail her by an unknown person?

In her statement, she explained that her mystery man had accidentally leaked the video on Snapchat, but that it had unfortunately ended up in the hands of this nefarious individual who is attempting to extort money from her using the video.

This new guy in her life turns out to be Abolo. Gistlovers, an Instagram blogger, made this known.

The blogger also claimed Tiwa’s recent blackmail story was a publicity stunt in a post on Monday, October 11, 2021.

”So apparently this is the Abolo that Tiwa is dating and is alleged to be in the said video which was a PR stunt, kindly go to our other page on IG to see the video and evidence of when the video was posted two years ago.

The lady in the picture looks so much like Tiwa but definitely not Tiwatope Savage, Na lie I hate, to those people doing yeye PR, let me teach you how to make Una song trend and make people vibe to am, just declare a challenge with the song, tell people to do challenge with it on IG o, Facebook o, tiktok ,before you know it your song is everywhere, stop sitting comfortably in front of camera to Dey grant yeye interview to deceive people, not fair.

I know say na your daily bread you dey find but at the same time INTEGRITY is key, aside that why dragging your name in the mud just to chase clout? why???”