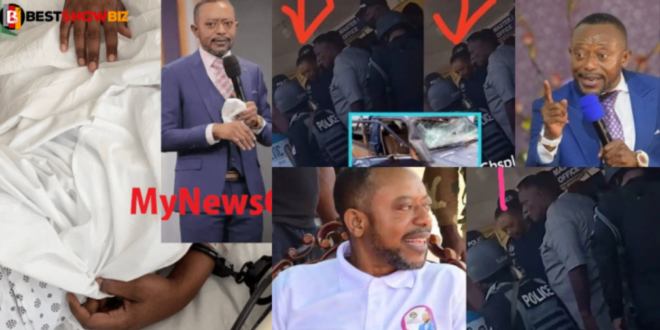 According to reports sighted online, Rev. Owusu Bempah has been brought to the hospital after feeling sick a few hours earlier.

Pictures of him being handcuffed to a hospital bed as he receives treatment have been released.

Owusu Bempah was denied bail earlier today when he appeared in front of a judge, and he will return to court on September 20.

It implies that the possibility of spending the next six days in confinement is weighing down on him, given that he has branded himself as the nation’s prophet and is close friends with the President.

We have discovered that all attempts by Owusu Bempah’s friends in authority to use their influence to get the handcuffs on him while undergoing treatment at the Police hospital removed have failed.

below are the photos trending;