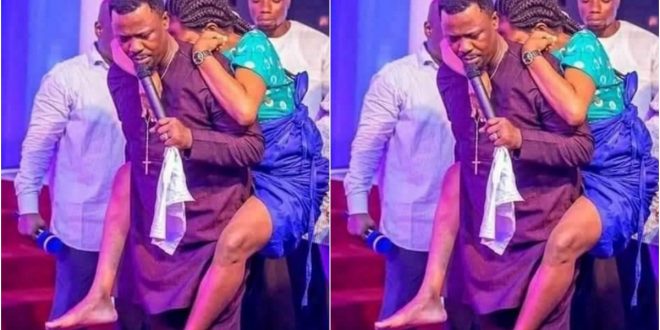 A recent picture of Nigel Gaisie has caught attention on social media and is still being deliberated upon as it captures him carrying ladies at his back during one of his church services.

According to sources, he claimed he was delivering these ladies, and as a direction from the Holy Spirit, they should be carried at his back so that it can be effective.

The picture was first leaked on Facebook by a lady identified as Abena Kyerewaa Adepa who angrily descended on the Man of God and claimed he is a Rapist and a Womanizer.

Nigel is currently on the tables of Kennedy Agyapong as he is still exposing him to his fake dealings.

The Ghana police service has finally considered the allegations on him and is scheduling an investigation into the matters. Sit tight and relax as we promise to feed you with any further news in relation to this issue.