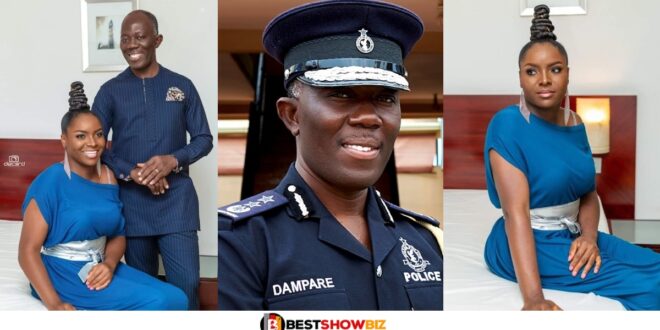 Many people have been drawn to a picture circulating on social media that shows the wife of Ghanaian IGP, George Akufo Dampare. This photo has sparked a lot of debate on social media, as many people believe the lady is his daughter rather than his wife.

Akumaa Mama Zimbi, a popular broadcast journalist, also shared the news with a caption confirming the lady as the IGP’s wife.

George Akuffo Dampare is a chartered accountant and police officer from Ghana. On 21 July 2021, President Nana Akufo-Addo appointed him as the acting Inspector General of Police of the Ghana Police Service, effective 1 August 2021, succeeding James Oppong-Boanuh, who had served since October 2019.

Dampare joined the Ghana Police Service as a Police Constable in December 1990, at the age of 20, and was named the overall Best Recruit at the National Police Training School, winning all awards except the Best Marksman award.