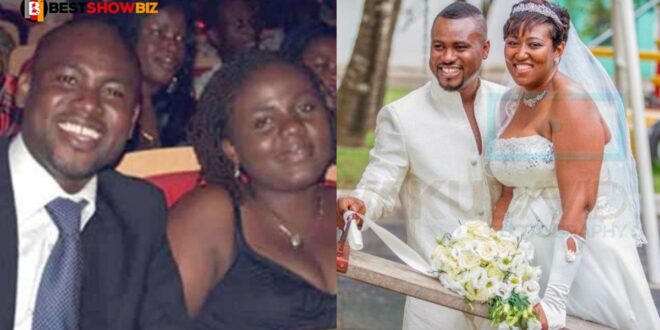 Abeiku Santana, known professionally as Gilbert Abeiku Aggrey Santana, is a Ghanaian radio and television personality who is now employed by the radio station Okay FM in Accra.

The Ghanaian media personality’s first marriage was to a lovely and exquisite lady named Margaret.

After Maggie and Abeiku Santana had been married for a year and a half, the presenter disclosed that he had divorced his first wife.

They have chosen to keep their reasons for divorce private, according to the media personality, but according to the divorce petition filed by Abeiku Santana, his wife acted in such a way that he could no longer live with her.

Abeiku Santana went on and claimed that they have not had any int*rcourse with each other for some months and that his wife has threatened to damage his reputation as a result.

Maggie stated in her response to the petition that she could no longer bear the embarrassment, difficulty, and mental anguish that she had been subjected to as a result of Abeiku Santana’s actions.

Well, Abeiku Santana is now married to Genevieve, a woman who is both super attractive and caring.

They were married in a beautiful ceremony in October 2013 that was attended by family and friends.

see photos of his second wife below;