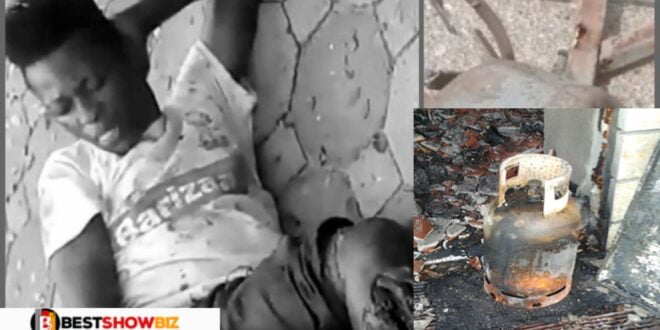 Gas explosion accidents are extremely fatal, and specialists have repeatedly warned against any leaks or manipulation of gas cylinders.

Gas explosion accidents are extremely fatal, and specialists have repeatedly warned against any leaks or manipulation of gas cylinders. a 28-year-old welder in the Ashanti Region’s Tanoso, and an injury to the lower limbs of a fried rice vendor.

The fried rice vendor, identified only as Hafiz, requested that the welder quickly repair a leak in his 6 kilograms (kg) gas cylinder so that he may resume his day’s cooking.

Hafiz, who’d been anxious to get these repairs done as soon as possible, stood near the cylinder to supervise the welder who was patching the leak.

When the welder lighted his welding device near to the cylinder, it exploded. Metal shards from the burst cylinder shattered his trunk, killing him instantaneously.

The blast knocked down Hafiz, the fried rice vendor. The blast from the gas cylinder totally destroyed his two legs. Every section of his leg near the knee was crushed, from the skin to bone.

The explosion drew a lot of attention, and rescuers were taken aback when they saw the devastation on the scene.

Hafiz was unable to stand, and blood was pouring from his limbs. Many believed he would die as a result, so some brave men knotted a band above his leg to stop the bleeding until National Ambulance Service paramedics came.

As far as anyone could tell, Hafiz never yelled in the face of a disaster that would leave him permanently crippled for the rest of his life.

He was carried into the ambulance by four men on a stretcher.

below are some photos.